(as compiled by Maryan Wherry)

In mid-1854, “a handful of Christians residing between Coal Valley and Sherrard wanted their own house of worship” (Argus 24 Mar 1959: 16). A committee was appointed by the Rock River Presbytery to investigate and organize a new church. Beulah Presbyterian Church was organized August 22, 1854, and its first services were held in the Bailey Schoolhouse. Twelve members are listed in the first session minutes; three more members were received the following October. By 1856, there were thirty members. The pastor’s salary was $200 a year for one-third time.

In 1859, members sought to build their own church. The title for the land for the church grounds and 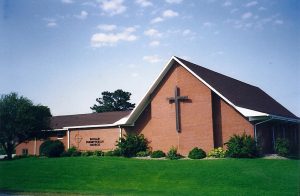 cemetery was given “to the Congregation . . . so long as it shall be used for an Old School Presbyterian Church.” The building contract went to Frederick Weyerhaeuser of Coal Valley. The cost of the building was about $1600. The building was dedicated on 17 August 1860. By this time, there were 39 members. With an addition and numerous repairs, this same modest country church stood until 1968. In 1908, new windows and new seats were installed and the interior was remodeled. After digging out under the building, a new coal furnace was installed.In 1914, there were 91 members, with 70 in Sunday School. The half-time minister was paid $400; the total budget in 1917 was $786.46. In 1922, a new annex was added on the south side of the church including a kitchen, and the exterior was recovered with stucco. The interior was redecorated in 1929.

The first mention of a pianist being elected is in the record for 1936–a Miss Marion Anderson–but she had begun playing piano for services in 1930. In 1945, the first two “big” church weddings were held: Kathryn Solomonson and Harold Betcher in May, Segil Silcox and Helen Whiteside in the fall. In 1954, the 100th anniversary of the founding of the church was celebrated by the membership of 171. In 1956, Beulah got its first full-time pastor. To house its own pastor, a manse was built on land donated by the Gust Andersons. All the labor to build the manse was donated by members except three days help installing the furnace; it was dedicated on 25 May 1958.

In 1959, Beulah was “awarded the Town and Country Achievement Award” in June; it was “one of four churches in the Monmouth Cooperative Parish of the Synod of Illinois to receive Rural Church of Distinction honors” (Argus 24 March 1959: 16). In 1962, an initial building study was conducted on whether to build a new church or add-on to the existing one. The congregation decided to build. In 1968, Beulah Presbyterian Church was a stucco-covered, frame church made of two sections: about 56 ft x 34 ft and 40 ft x 70 ft. On the night of 14 March, Beulah Church burned to the ground. The fire was noticed just before 9.00pm. The glow could be seen as far away as Orion. Over 100 fire fighters of six fire departments responded but were unable to save the old building. The new sanctuary was about half finished. Flames and embers were carried by stiff gusting winds but damage to the new church was limited to curled shingles and heat damage to the roof (Dispatch 15 March 1968: 11). A concrete wall between the structures, intended to be the outside wall of a Sunday School room, was responsible for “saving” the new church. In a poignant turn of events, Aunt Vinnie Hutchinson, the oldest member of the congregation, died that same evening. 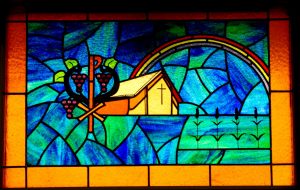 The 205 members of the congregation met in the chapel of Kirk and Huggins Funeral Home and in the Rural Township Hall. Finally, the new building was complete enough in which to hold se

rvices and the members brought their own chairs from home for seating. Two crosses were constructed of the charred timbers from the old church: one was lighted and placed on the outside; the other inside the sanctuary. They represent the spirit of Beulah with the likeness of the first cross. The new church was dedicated on 7 December 1969; the sermon for the dedication was entitled “What’s a Nice Church Like You Doing in a Place Like This?”

Today, some 160 years later, Beulah Presbyterian Church is still an active and exciting home for a handful of Christians who want their own house of worship.